The First Step Act would curb mandatory minimums for many low-level drug crimes, providing judges with more discretion over individual cases. The bill also aims to eliminate the three-strike rule. Some sentencing reductions were not made retroactive, which could have helped thousands of people to return home. Additional money would be designated for employment training and programming to reduce recidivism.

The bill has been approved by a Senate committee, but it still needs to go through the full Senate and time is running out. Urge your senators to pass this important legislation now. Read more.

Border walls: With construction set to start early next year on dozens of miles of new border fencing and walls in south Texas, the Trump administration and House Republican leaders are calling for $5 billion for additional walls (about 200 miles) and threatening a partial government shutdown if they don’t get it. Without further action, funding will run out for several federal agencies on Dec. 22. Both fencing and walls will have devastating impacts for border communities. Take action.

Migrant caravans: More than 5,000 Central American migrants have recently arrived at the U.S.-Mexico border. The new arrivals must wait in line behind more than 3,000 asylum seekers already waiting to cross. Chaos erupted on Nov. 25 when some migrants tried to cross through walls and wire, and U.S. border agents responded with tear gas. A federal judge halted a new Trump administration policy denying asylum to those entering between ports of entry.

DR Congo: On November 27 the House passed a resolution on the Democratic Republic of the Congo, supporting DR Congo’s democracy and accountability as parliamentary elections take place this December.

Keystone Pipeline: A district court judge in Montana halted construction on the Keystone XL Pipeline, which would bring heavy crude oil from Canada's oil sands into the U.S. The order requires the State Department to conduct a thorough environmental review.

Native American concerns: The Senate Committee on Indian Affairs unanimously passed Savanna's Act, which now awaits action from the full Senate. The legislation would help law enforcement officers respond to and track cases of missing and murdered Native women and girls, who face a murder rate 10 times the national

Criminal justice reforms on the verge of passing

Reinvigorating trust in the midst of displacement (Nigeria) 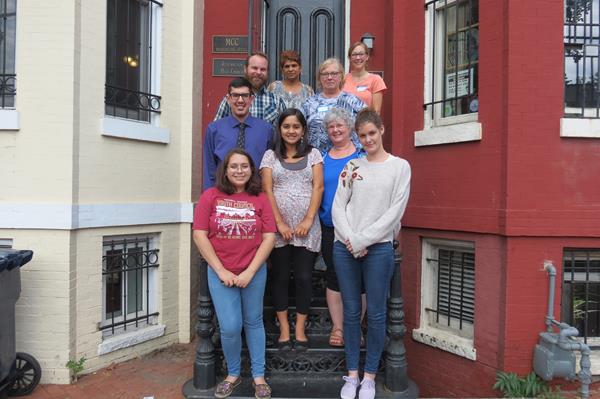 Ask the EPA to keep methane pollution standards in place (comments due by Dec. 17)

Ask your senators to support the First Step Act

April 5-8, 2019: Join us in Washington, D.C. for Ecumenical Advocacy Days 2019, “Troubling the Waters for the Healing of the World!” Through worship,  workshops, advocacy and public witness, we will envision and train for new ways to stir up #GoodTrouble for the healing of all God’s children. Register today!

On November 30, Tammy Alexander spoke with a group of students from the American Studies Program about immigration.